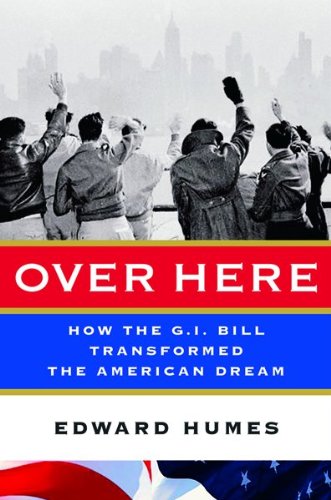 Over Here: How the G.I. Bill Transformed the American Dream

Humes examines and celebrates the G.I. Bill, the benefit program for veterans signed into law two weeks after D-Day. A remarkably farsighted piece of legislation, the G.I. Bill aimed to reintegrate into American society the 16 million veterans who would return from WWII. To explain how the bill worked, Humes ( ) tells the stories of 10 veterans, showing how G.I. benefits changed their postwar lives and transformed American society. In the five years after V-J Day, eight million returning vets made use of the bill's educational provisions, while the bill's loan guarantees brought home ownership within the reach of five million vets, resulting in the explosive development of suburbia. Humes is alert to the G.I. Bill's failures as well. For example, black vets were shunted into vocational training rather than college and were systematically redlined away from the new suburbs. Humes has a political point to make: the bill, he says, was an enormous giveaway program by big government, one that cost a fortune while reaping an even larger fortune for the country. Yet the WWII vets who benefited from this largesse became the core constituency opposing taxpayer funding of social programs, with the result that only meager benefits await those returning from today's wars.