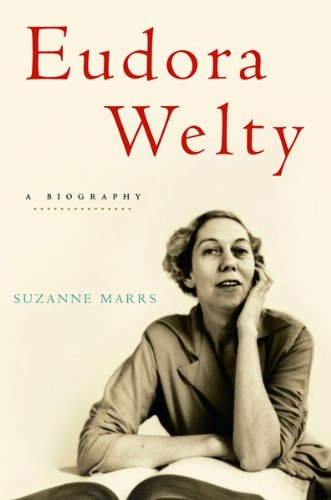 I was seduced by Eudora Welty. I had every reason to distrust her, as I had distrusted Faulkner—both of them products of the middle-class South I disdained in preference for what I called the real South—the queer and working-class writers I took as my own models. Part of my distrust came from all those photographs—those neat, well-put-together, backcover shots.

Marrs takes pains to refute the image of Eudora as a perfect "Southern Lady," a "nearly petrified woman holding to the mores of the Southern past"—myths strengthened and reinforced by Ann Waldron's 1998 biography and the lengthy article by Claudia Roth Pierpont. That Welty knew how she was imagined, and that she had the grace—a deep, resonant well of humor, insight and talent—is made plain.

Here we have the necessary counterpoint: not Eudora the pitiful old maid nor Eudora the homely, the victim of her domineering mother, but the real deal: Eudora the writer who loved fiercely but never married, falling in love first with a man who, though he loved her, would always love men more, and then with a man who was not only married and faithful to his wife, but doomed by Alzheimer's and early death to recede from the genuine affection he felt for her.

The story of Eudora Welty's long relationship with Kenneth Millar, who wrote detective fiction under the pen name Ross Macdonald, has the weight of genuine tragedy. Both of them believed in the magic of fate, their meeting at the Algonquin Hotel in 1971 and the years of twice-monthly correspondence that followed. One of the revelations of the biography is that Ken Millar and Eudora were in each other's company only about six weeks in total. Though Eudora tried, she was never able to complete any of the stories she began on the subject.

For all the emphasis on Eudora's loneliness, her everyday life contained a rich and sustained circle of friends who were some of the great writers and public figures of the 20th century. Yes, she had her mother and cared for her deeply, but she had also friends who valued what she did and sustained her and it. Think of Katharine Anne Porter , Elizabeth Bowen, Reynolds Price, Robert Penn Warren, Stephen Spender and Anne Tyler.

"You love Eudora as a friend," Ken Millar once said to Reynolds Price. "I love her as a woman." The rest of us get to love her as a writer, and with this biography—the whole of her extraordinary world.