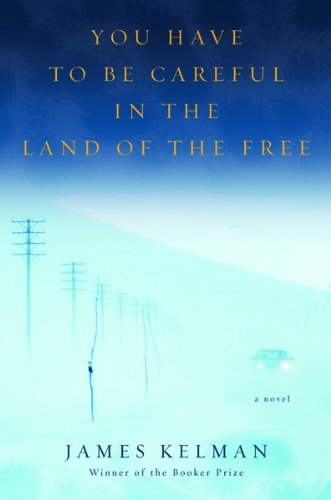 YOU HAVE TO BE CAREFUL IN THE LAND OF THE FREE

Booker Prize–winning Kelman ( ) returns with another exuberant novel steeped in Scottish dialect. Jeremiah Brown, the 32-year-old Scottish narrator, has lived in the United States for more than 12 years, acquiring an ex-girlfriend, a daughter ("the wean" he calls her) and a string of dead-end jobs. The novel is a chatty record of his last night in the country, before he returns to Glasgow (in the country of "Skallin," as he calls it) to see his ailing mother. As Jeremiah bar-hops in an unnamed Midwestern town, drinking beer after beer, he reflects on his life as an immigrant ("I read someplace the emigrants werenay the best people, the best people steyed at hame"), his relationship with Yasmin and their daughter, and just about anything else that pops into his head: "I had naybody to talk to, it was just my ayn fantastic inner dramatics." The effect is like being captive audience to a drunk, sad, funny, bitter, paranoid but hopeful man who has thus far in his life "messed things up." The novel can feel claustrophobic at times, since the reader is trapped in Jeremiah's rambling mind. But Kelman pulls off this literary feat, aided by the undeniable charm and appeal of Jeremiah. The reader becomes easily acclimated to his Scottish vernacular ("I didnay even want to go hame"), which lends the work authenticity and immediacy—his voice resonates as he veers from story to story, only interrupting himself to order another beer and take in his surroundings. Kelman's latest will please and reward readers patient enough to pull up a chair and listen.