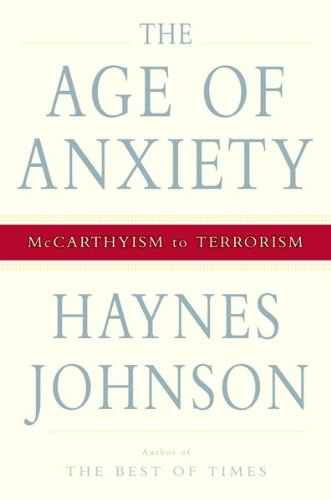 The Age of Anxiety: McCarthyism to Terrorism

Pulitzer-winning journalist Johnson ( ) offers an engrossing account of the career of red-baiting demagogue Joseph McCarthy and a chilling description of his legacy for today. The focus is on the disturbing questions raised by McCarthyism: how could a little-known freshman senator, driven by Cold War paranoia, quickly amass the power to intimidate senior colleagues, bully the media, terrorize innocent citizens and even threaten two respected presidents? Why did fellow Republicans not reject his sleazy, dishonest tactics when they were personally revolted by them? Most urgently, are we seeing the birth of a new "age of anxiety," in which terrorism replaces communism as the bogeyman? Johnson's answer is clearly yes. He traces the current climate in Washington directly to the 1950s: "McCarthyism was a major factor in the rise of the radical Right and the polarization that plagues American life, pitting group against group and region against region, sowing cynicism and distrust, and manipulating public opinion through fear and smear." He reviews recent events, including the use of the Patriot Act to stifle dissent, the abuse and detention of thousands of American Muslims guilty of no crime, and politicians' readiness to impugn the patriotism of opponents without evidence. Johnson's own critique is not ideological; rather, his most important argument may be that ideological polarization continues to prevent us from rationally assessing and dealing with real threats. 8 pages of b&w photos not seen by