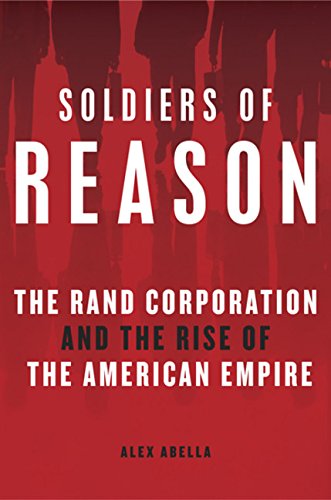 Soldiers of Reason: The RAND Corporation and the Rise of the American Empire

When President Eisenhower famously warned against the military-industrial complex, he largely meant the Department of Defense–funded programs of the RAND Corporation. Abella (coauthor, ) presents a sometimes dry but thorough account of this think-tank, which he asserts not only played a key role in the U.S.'s biggest foreign misadventures in Vietnam and Iraq but also, through its development of “rational choice theory,” has affected every aspect of our lives, not necessarily for the better. Abella, working with the cooperation of the usually secretive organization, details RAND'S history, from analyst Herman Kahn's energetic support of a virtually unrestrained nuclear arms buildup to the organization's role in sparking America's involvement in Vietnam and the current war in Iraq. But even more, Abella says, RAND theorists' notion that self-interest, rather than collective interests like religion, governs human behavior has influenced every aspect of our society, from health care to tax policy. The RAND Corporation continues today—as brilliant, controversial and, in Abella's view, amoral as ever—with the complicity of all Americans. “If we look in the mirror,” Abella concludes, “we will see that RAND is every one of us. The question is, what are we going to do about it?” 8 pages of b&w photos.