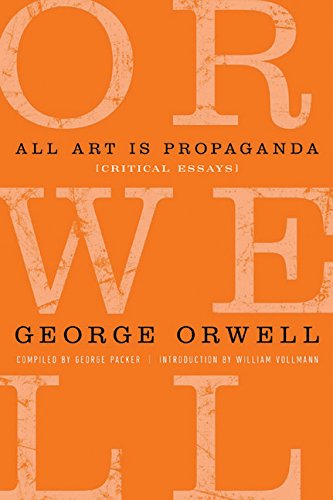 All Art Is Propaganda: Critical Essays

Before he was a renowned novelist, George Orwell was a masterful essayist. Spanning the 1940s, this companion to showcases Orwell in an often unexpected cavalcade of observations on diverse subjects—in the literary field alone as varied as T. S. Eliot, Charles Dickens, Henry Miller, Graham Greene and Kipling. But since this is Orwell, the book takes on a range of subjects with gusto: power and bully worship and the deleterious influence of Catholicism on literature. Orwell’s withering observations on professional academic criticism (“Politics and the English Language”) are tempered by his sly “Confessions of a Book Reviewer” (“constantly reactions towards books about which one has no spontaneous feelings whatever”) and “Good Bad Books” (the “supreme example” being ). Not to be overlooked is a freewheeling take on the naughty postcards of Donald McGill. Overall, this collection highlights the work of a writer who always put his money where his mouth was, reiterating frequently the importance of clarity of expression in enabling independent thought.