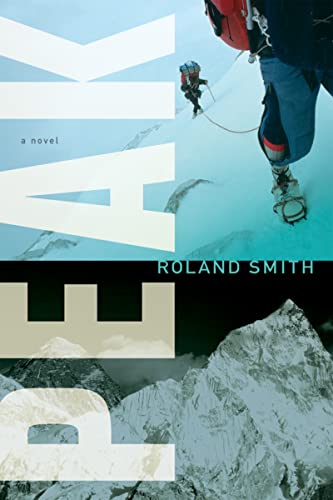 Here's the perfect antidote for a kid who thinks books are boring. In his latest, Smith ( ) introduces 14-year-old Peak Marcello (named by his mountaineering parents) as he's arrested for scaling Manhattan's Woolworth Building, in an attempt to graffiti his tag—a blue mountain peak—high on the side of it. Peak is headed for a long stint in juvie when his estranged father swoops into the courtroom with a solution that will get the media's newest darling—the papers have dubbed Peak “Spider Boy”—immediately and far out of sight. Before the trek to China, where Peak's father runs a commercial climbing operation on the Tibetan side of Mount Everest, Peak's English teacher, Vincent, gives him two notebooks to fill, which will complete his requirements for the school year. This conceit allows Peak to tell his story in his own wry voice and to share lots of Vincent's advice. “A good writer should draw the reader in by starting in the middle of the story with a ,” Peak recalls. “I guess Vincent thinks readers are fish.” The hook here is irresistible—Peak will try to become the youngest person ever to scale Everest—overcoming Chinese bureaucrats, resentment of his father, rivalry with a Nepalese teen who has the same goal, avalanches, icy crevasses, howling winds, searing cold and many, many frozen corpses to reach the 29,028-foot summit. The nifty plotting, gripping story line and Peak's assured delivery give those who join this expedition much to savor. Ages 12-up.