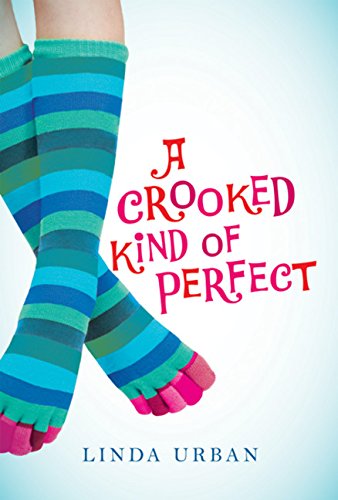 A Crooked Kind of Perfect

Former bookseller Urban makes a highly promising fiction debut with this sweet, funny novel, relayed in short, titled entries. Ten-year-old Zoe dreams of becoming a famous pianist (as she says in “How It Was Supposed to Be,” “A piano is sophisticated. Glamorous. Worldly”). But her quasi-agoraphobic father has one of his usual freak-outs as he attempts to shop for a piano and buys her an electric organ instead. How can Zoe possibly become the next Vladimir Horowitz if she has to play on a “Perfectone D-60”? Grudgingly, she begins taking lessons from Mabelline Person (pronounced “Per- ”), who hands Zoe songbooks full of TV theme songs or hits from the ’70s (“My piano teacher was supposed to be a sweet, rumpled old man,” Zoe confides to readers. “I would call him Maestro…. He would discourage me from practicing too much and spoiling the spontaneity of my play”). But when Mabelline enters her in the Perform-O-Rama—her first contest ever—Zoe thinks for the first time that her dreams could possibly come true. Throw in an absurdly workaholic mother, a best friend who deserts Zoe for a girl with a rhyming name (Joella Tinstella), an underparented boy who blossoms overnight when Zoe’s dad takes him under his wing, and Zoe’s dad’s eccentricities, if not to say full-blown neuroses; Urban controls these exaggerated elements through the evenness of Zoe’s voice. No matter how outrageously her subjects behave, the author always sounds natural. Ages 8-12.