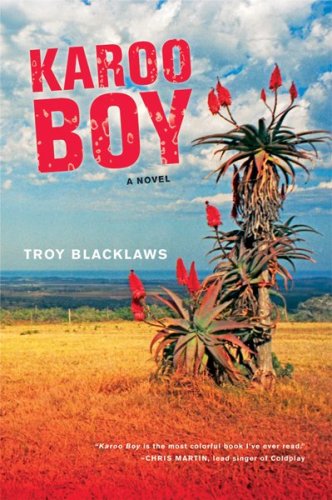 Death divides a Cape Town family in Blacklaws's evocative but frustrating debut. The story, set in 1976 but narrated in a terse, foreboding and sometimes baffling present tense, begins with 14-year old Douglas Thomas's father accidentally killing his other son, Marsden (Douglas's twin), with an errant cricket pitch. Family disintegration follows: Douglas's father announces that he is "going away," and his mother decides that they're moving to Karoo—a "foreign, far, flat and bleak" place. In Karoo, Douglas befriends Moses, an old black man who works at the gas station and who cannot leave the area because his papers have been stolen. Between italicized flashbacks to Marsden and Sundays with Moses retooling a broken-down Volvo (they both dream of driving back to the ocean), Douglas falls for a girl named Marika. The novel zigzags between vivid descriptive passages and sudden bursts of violence that recall the social and political nightmare that was 1970s South Africa. The historical realities feel out of focus, however, and the characters' motives are often unclear. Though this is a coming-of-age tale, readers will be startled to learn that Douglas, when he finally returns to the seaside alone, is 18; this, along with the other narrative hinges in the story, feels sloppily handled for the sake of a rather ersatz lyrical style.