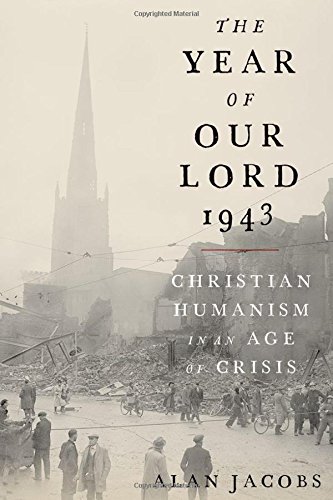 The Year of Our Lord 1943: Christian Humanism in an Age of Crisis

Jacobs (How to Think), professor of humanities at Baylor University, explores the response of Christian humanists to the global conflagration of WWII in this precise survey. Jacobs focuses on five well-known figures: W.H. Auden, T.S. Eliot, C.S. Lewis, Jacques Maritain, and Simone Weil. Though four of them are white men, they do represent both Catholic and Protestant thought, and were not all in agreement. Taking the year 1943 as a pivot point when the military victory of the allied forces seemed likely, the work considers how Auden, Eliot, Lewis, Maritain, Weil, and their circles made sense of the war and their moral responsibilities during and after the conflict. The book is structured around the questions they posed, and proposed answers to, including: Is our cause just? What is the use of scholarship in wartime? What is the role of the supernatural in worldly evil? What is the role of moral force when confronting new, dangerous technologies? Is patriotism perverse? And what is the place of Christian, humanist education in constructing a more peaceful world? While Jacobs can only begin to scratch the surface of such complex debates, his book is an erudite collective portrait of postwar Christian intellectuals. (Aug.)
close
Details