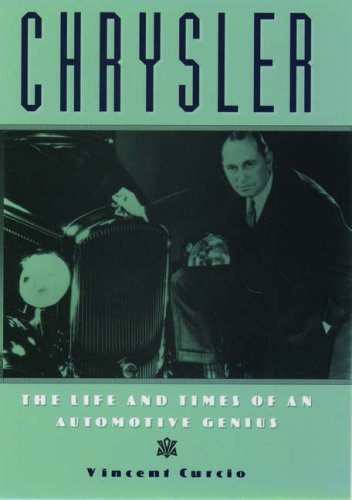 Chrysler: The Life and Times of an American Automotive Genius

From humble beginnings as a Kansas railroad-shop apprentice wiping down locomotives for 5U cents an hour, Walter Chrysler (1875-1940) rose to become a railroad master mechanic and foreman, then a leading auto manufacturer and industrial mogul. Brashly confident, convinced of America's limitless potential for economic growth, Chrysler, ""the quintessence of American business in the 1920s,"" built Manhattan's Chrysler Building--art deco emblem of modernism and progress--whose spire went up just one month before the 1929 stock market crash. This dynamic biography brings a surprisingly neglected giant out of the shadows. Chrysler, self-educated, self-made son of a German immigrant, is not nearly as well known as Henry Ford, even though he expanded Detroit's Big Two (GM and Ford) into the Big Three, when Chrysler Corporation bought out Dodge in 1928. (His legacy lives on in Daimler-Chrysler, formed in 1998.) Two contrasting personalities emerge: one is the far-sighted, risk-taking industrialist, perhaps the last great individualist of automaking, a man who seemed genuinely concerned about his employees, a caring father of four with a rare gift for managing men, plants and machinery. The other is the hard-drinking, big-eating, tuba-playing bon vivant, ""probably... a functioning alcoholic,"" who embarrassed his family and nearly wrecked his marriage thanks to his affair with showgirl Peggy Hopkins Joyce. Curcio never fully reconciles these two sides of his elusive subject, but his robust, engaging portrait is chock-full of lore from the classic automobile era, as it sets the Chrysler saga against the backdrop of the Roaring 20s, the Depression and the labor unrest of the 1930s. 50 photos. (July)
close
Details