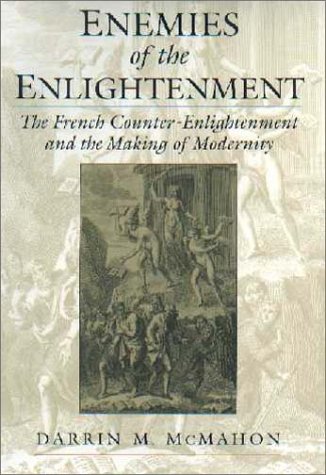 ENEMIES OF THE ENLIGHTENMENT: The French Counter-Enlightenment and the Making of Modernity

History has often overlooked the men and women who resisted the triumphal progress of Western society toward Reason: spiritual Luddites, it seems at first glance, hoping to smash the ideological machinery of atheism and democracy. But in this sophisticated deconstruction of conservative opposition to the Enlightenment, McMahon, a fellow in history at NYU, re-envisions intellectual history from 1750 to 1830 as an ideological dialectic foreshadowing the culture wars of our own time and helping to define modernity. As McMahon shows, many Catholics saw Voltaire and his ilk as harbingers of degenerate hedonism, a diabolical menace to church, state and family. These anti- accused their enemies of practicing the very intolerance they condemned, and were convinced that danger lurked in philosophic fanaticism. Their horrified voices, audible from the mid-18th century on, became louder as the Enlightenment gathered momentum. Unable to stop the French Revolution, their protests seemed prophetic to many when idealism turned to terror. The ghost of Counter-Enlightenment ideology has been conspicuous in more recent times in Spain, Italy and Latin America, just as the specter of leftist violence has been repeatedly invoked. McMahon's argument is deeply versed in recent scholarship; his prose is polished, and the book is illustrated with compelling examples of visual propaganda (notably, Voltaire caught in flagrante delicto). While this title lacks the mass appeal of Simon Schama's or other narrative-oriented histories of the revolution, its relevance to conservative-liberal tensions in the U.S. make it worthy of broad intellectual discussion.