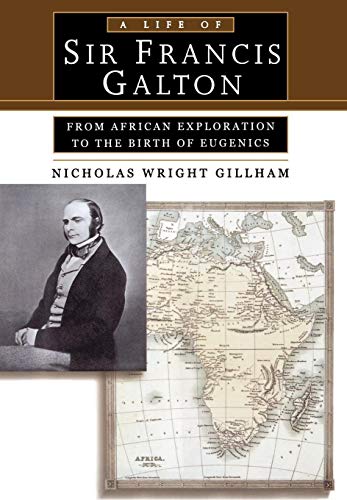 A LIFE OF SIR FRANCIS GALTON: From African Explorer to the Birth of Eugenics

This may well prove to be the definitive biography of the British explorer, a cousin and contemporary of Charles Darwin. Gillham, emeritus professor of biology at Duke University, offers an elegant and complete portrait comparable to Janet Browne's acclaimed life of Darwin. Galton is best known as the founder of eugenics, but his interests and subsequent contributions as Victorian traveler and scientist were myriad. Like Darwin, he set out to become a doctor but his curiosity led him further afield—in Galton's case, to Africa. He won fame for his expedition in Nambia and his subsequent book of observations, and became an accomplished geographer and meteorologist credited with discovering the anticyclone. Greatly influenced in later life by the , Galton committed himself to the study of human heredity, leading, for example, to his use of fingerprinting, an innovation adopted by Scotland Yard, and the development of important statistical tools. His work unraveling the heritability of what he called "talent and character" predated the rediscovery of Gregor Mendel's principals and the use of IQ tests. Galton relied on pedigree analysis, twin studies and biometrics to measure the favorable physical characteristics that he theorized evidenced mental superiority. Gillham sheds light on the confluence of Victorian social theory and science brought on by the Darwinian revolution. From this confluence emerged the utopian eugenics movement, which by 1913 had spawned involuntary sterilization laws in 16 of the United States and set the stage for Nazi Germany's atrocities in the name of racial purity. Photos.