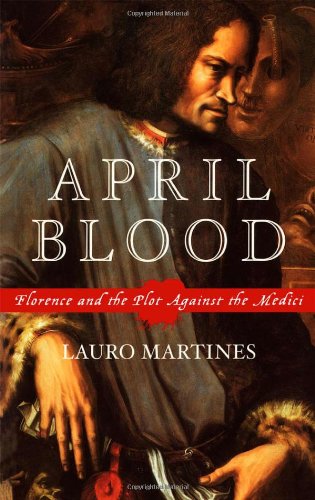 APRIL BLOOD: Florence and the Plot Against the Nation

One April Sunday in 1478, assassins—with the support of a member of the Pazzi, one of Florence's leading families—killed a member of the ruling family of Florence, Giuliano de Medici, and wounded his brother, Lorenzo. In the hands of Martines, a professor emeritus of European history at UCLA, the rebellion and Lorenzo's ensuing crackdown becomes a prism through which to view Renaissance Florence. He details the many people involved, from bankers to the king of Naples and even Pope Sixtus. Long seen as a "Renaissance man," Lorenzo was a poet and a patron of the arts. But Martines turns the story on its head. He sees the plot as a reaction to the corruption in Medici rule and the crackdown—which included hangings and prohibitions against marrying female members of the Pazzi family—as overly harsh: "[I]t required war or a successful act of terrorism to overthrow Lorenzo, his cronies, and his creatures." While the crackdown temporarily saved the Medici rule, Martines argues that Lorenzo's ruthlessness eventually turned much of Florence against his family and foretold the end of Medici rule in the city. During the past few decades, historians have increasingly placed social, cultural and women's history at the center of European history. But not here. Drawing upon a lifetime of scholarship, Martines has created a book that places governmental politics at Renaissance Florence's center. And along the way, he has written a book as lively as its subject.