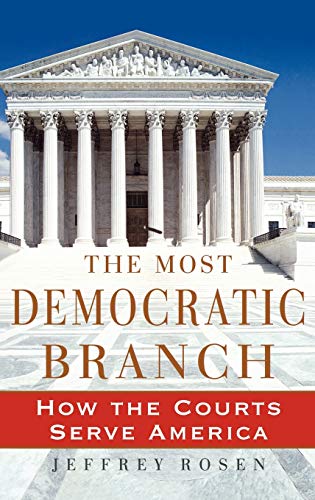 The Most Democratic Branch: How the Courts Serve America

At a time when the Supreme Court may be poised to reverse v. , Rosen, legal affairs editor for the and a professor of law at George Washington University, offers a thoughtful view of what has made Court pronouncements effective and how the Court can actually maintain its independence by following the mainstream of public opinion. His thesis is a model of common sense: the justices have been most effective "when they have followed a national consensus after it has crystallized, rather than trying to coax one into being ahead of schedule." In support of his argument Rosen analyzes Supreme Court precedents regarding race, privacy, politics and civil liberties. In v. , Rosen argues, while the South resisted vehemently, the majority of Americans supported desegregating the schools and the Southern backlash helped solidify that opinion. Finally, and perhaps most controversially, in an era when "constitutional politics has become a blood sport," Rosen calls for bipartisan judicial modesty and restraint. This is a well-reasoned effort that raises provocative questions about how the Supreme Court might approach looming issues such as those raised by stem cell research and privacy rights in a time of increasing technological capabilities.