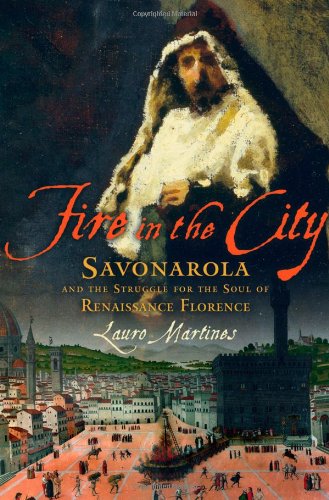 Fire in the City: Savonarola and the Struggle for the Soul of Renaissance Florence

Heretic. Madman. Religious fanatic. Political reactionary. All these terms have been used to describe the Dominican friar Girolamo Savonarola (1452–1498), who challenged both the authority of the pope and the power of the Florentine throne. Martines's fast-paced study weaves a first-rate social history of Renaissance Florence with a deeply affecting and more complex portrait of Savonarola. The friar's fiery preaching against greed and for social justice garnered him many followers. Savonarola condemned the excesses of a church that tried to fill its coffers by mistreating the poor and an authoritarian monarchy complicit with this church. Once the ruling Medicis fell from power, he led a movement to create a Great Council, comprising middle-class citizens, which led the city for almost 20 years until a monarchy was restored. By the end of the century, Savonarola's support for this republican government, his steady condemnation of personal and social immorality and his strident preaching led to his excommunication, trial and execution. This absorbing account by Martines, professor emeritus of European history at UCLA, captures Savonarola's brilliance as well as the exciting and dangerous days of Renaissance Florence. 30 b&w illus. not seen by .