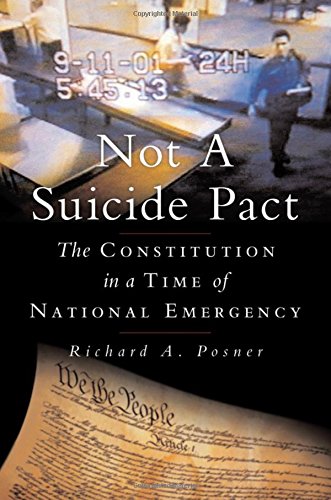 Not a Suicide Pact: The Constitution in a Time of National Emergency

Posner, who sits on the U.S. Court of Appeals for the Seventh Circuit, inaugurates a new series on inalienable rights. The series is intended to stimulate debate, and Posner's work will do exactly that, drilling energetically into a set of issues raised by what he sees as an unprecedented emergency. In the fact of terrorism and the threat of WMDs, he argues, the scope of constitutional rights must be adjusted—i.e., narrowed—in a pragmatic but rational manner. Saying we must balance the harm new security measures inflict on personal liberty against the increased security those measures provide, Posner comes down, in most but not quite all respects, on the side of increased government power. He advocates that coercive and even brutal forms of interrogation should be allowed in proper circumstances, that all communications within the United States should be subject to interception, and that government should have authority to enjoin publication of classified information. Posner ( ) would impose limits and qualifications on these assertions of government power, but even so, his views will provoke Category 5 protest from civil libertarians. You may agree with or be appalled by Posner's cost-benefit analyses, but the author's premises are explicit, his writing is economical and precise, and he ably makes the case for his side in the national debate.