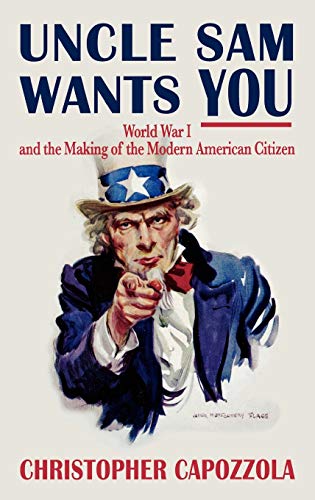 Uncle Sam Wants You: World War I and the Making of the Modern American Citizen

The newly created image of Uncle Sam defined Americans' sense of obligation to their country during WWI, says Capozzola, associate professor of history at MIT. But the war also “blurred the lines between... mobilization and social control.” Capozzola does an excellent job of rendering the jingoistic, dogmatic mindset that characterized the country at a crucial time. The mobilization led 13 million American males between the ages of 18 and 45 to enthusiastically swarm to local draft boards, and women planted “Victory Gardens.” On the other hand, “home guards” kept an eye on “enemy aliens”—Americans unlucky enough to be afflicted with German heritage when this was neither convenient nor popular. Concurrently, Americans abdicated power (and key freedoms) to the federal government, while those who advocated for peace were repudiated by most. Even the revered Jane Addams was castigated by the press when she spoke against the war. It seemed, Capozzola says, that being a true American meant mindlessly going along with the status quo. All this the author captures in eloquently rendered and assiduously researched detail. 15 b&w illus.