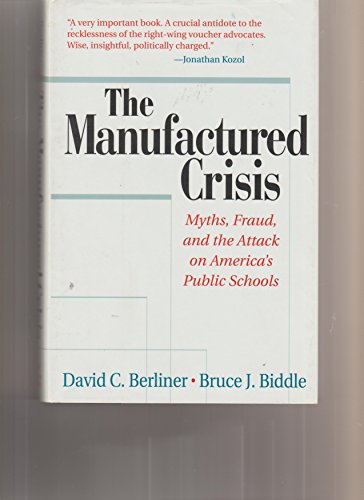 The Manufactured Crisis: Myths, Fraud, and the Attack on America's Public Schools

Outrage over perceived scapegoating of educators by legislators and other voluble critics of American public schools fuels the authors' efforts to expose what they consider the real problems. While deploring the campaign of criticism they view as ``manufactured,'' based on misleading data and leading to questionable reforms, they marshal impressive evidence to counter such assertions as that SAT scores have declined and other, similar charges. The real problems of our schools, they suggest, are societal and economic; they point out, for example, that ``family incomes and financial support for schools are much more poorly distributed in our country than in other industrialized nations. This means that... large numbers of students who are truly disadvantaged attend public schools whose support is far below that permitted in other Western democracies.'' Berliner, professor of education at the University of Arizona, and Biddle, director for social research at the University of Missouri, identify a wealth of possible strategies for improving schools. A probing, well-argued rebuttal of detractors of public education. Illustrations. (Sept.)
close
Details