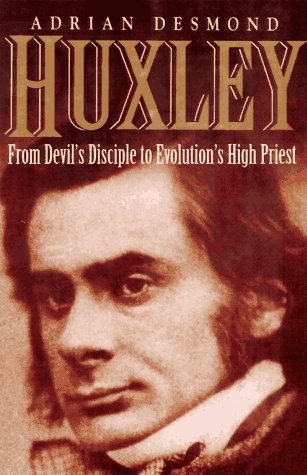 Desmond (coauthor with James Moore of Darwin) has produced a dramatic if densely detailed and sometimes self-consciously literary life of Thomas Huxley, the contentious missionary of evolution, known in his day as Darwin's bulldog--""one of the founders of the sceptical, scientific twentieth century."" Huxley's beginnings as a physician and marine biologist emerge vividly, as does the ferment of ideas that turned him into an impassioned religious radical yet systematic professional. The functional architecture of nature, developing through trial and error, was not, he argued, God's handwriting. To move minds, however, he needed to manage his way into positions of intellectual authority that paid only butler's wages. Yet his evolutionary evangelism contradicted biblical dogma and threatened to keep him on the edge of penury. The gentlemanly, reclusive Darwin let the feisty but lower-class Huxley battle what he derided as ""Theology and Parsondom,"" which both saw as the ""irreconcilable enemies of Science."" In the year of Darwin's Origin of Species (1859), Huxley vowed that if he lived for 30 more years, he would ""see the foot of Science on the necks of her Enemies."" Born in 1825, he died in 1895, but, one of the celebrities of his time, he had long been burned out. Not, though, the reader of this challenging, stimulating work. Illustrations. (Nov.)
close
Details