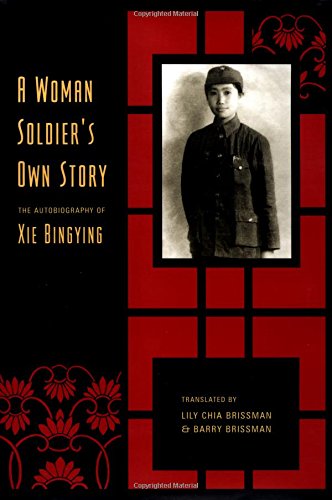 A WOMAN SOLDIER'S OWN STORY: The Autobiography of Xie Bingying

In lyrical, flowing prose, this absorbing autobiography interweaves politics, family relations and romance as it chronicles an extraordinary woman's struggle to free herself from traditional Chinese society. Born into a conventional family, Xie Bingying (1906–2000) was expected to be an obedient daughter and, later, daughter-in-law. A girl's education was largely restricted to learning how to spin cotton and embroider. Xie's reading was limited to such books as . Her fate was to be determined by her parents and a matchmaker. From an early age, Xie rebelled against these circumstances. Despite her mother's scolding, she dared to venture outside to play with the boys, and she fought fiercely against having her feet bound. In this chronicle of the first 32 years of her life, gracefully translated by her daughter and son-in-law, Xie recounts her efforts to secure an education, escape from an arranged marriage, raise an infant while a single mother and, chiefly, forge political change in China as a soldier in the National Revolutionary Army fighting the warlords who dominated much of China in the 1920s, and against the Japanese in the 1930s. Drawn to the bohemian life, Xie scoffed at financial and physical security, and gloried in her image as a "warrior who opposes all feudal rule," even when her choices summoned hunger, loneliness and imprisonment. The happiest day of her early life, she recalls, was the day in 1928 when her was published. She went on to become a noted author of novels, other autobiographical works and essays. This story of a Chinese feminist makes social and political issues of 20th-century China dramatically accessible to the lay reader. 12 photos, 3 maps.