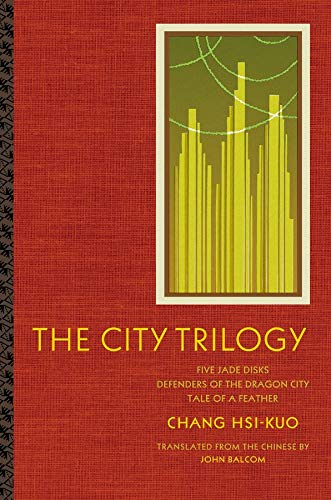 THE CITY TRILOGY: Five Jade Disks, Defenders of the Dragon City, Tale of a Feather

Set in fictional Sunlon City during an unspecified period, these three enigmatic short novels by the father of Taiwanese SF offer Chang's view of "the true nature of human society in general and Chinese society in particular," as the translator says in his preface of the 1980 story "City of the Bronze Statue," which serves as the trilogy's prologue. (1984) traces the efforts of the native Huhui to retake Sunlon City ("Sun" plus "lon," as in "Babylon") from their interstellar overlords, the Shan. In (1986), the Shan return to try to destroy the city. Several years later, in (1996), a dictator seizes the city's government and tries to exterminate all his enemies, including the Shan and the several races of Huhui natives. Despite the translator's valiant attempts to animate these characters through colloquial Americanisms and slangy locutions, Huhui "soul toucher" (singer) Miss Qi and her several comrades never come alive. Shifting alliances among races; warrior brotherhood bonds continually broken and reshaped; kaleidoscopic political machinations as well as a strange pictographic invented language that obstructs rather than enlightens the narrative: these all muddle the bleak, deterministic view of a society dominated by an ever-more malignant "Bronze Statue" and its cult—the embodiment of Chang's terrifying concept of human history. (