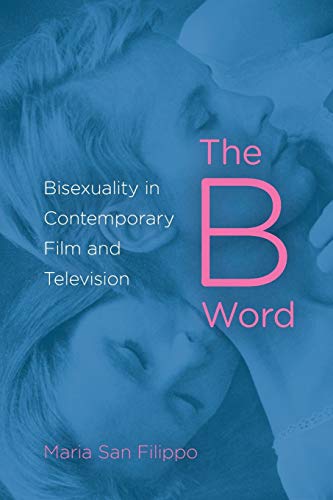 The B Word: Bisexuality in Contemporary Film and Television

San Filippo%E2%80%94a multidisciplinary scholar of film, television, sexuality, and gender studies%E2%80%94draws on all of those sources for this comprehensive, no-holds-barred examination of the portrayal and impact of bisexuality in modern entertainment. Touching on cultural milestones such as Brokeback Mountain, Mulholland Drive, Chasing Amy, A Shot of Love, and hundreds more, she tackles a wide range of topics. Power, privilege, exploitation, the dominance of monosexuality%E2%80%94no permutation goes unexplored, no bisexual presence goes unmentioned. Both male and female bisexuality gets covered, as San Filippo examines how the various tropes have infiltrated the entertainment industry. It's a passionate, knowledgeable, educational study, drawing from old and new sources alike. Unfortunately, the author often resorts to 10-dollar words, resulting in an academically impenetrable wall of text, enough to fend off the more casual reader. "It is precisely bisexuality's epistemological and textual polysemy that generates its subversive potential to lay bare the mutability, contingency, and inherent transgressiveness of desire," is both one of the most profound and alienating passages to be found here. Get through that, and a treasure trove of information is unlocked. San Filippo seeks to redefine our perception of bisexuality; in this study, she's off to a good start. (Apr.)
close
Details