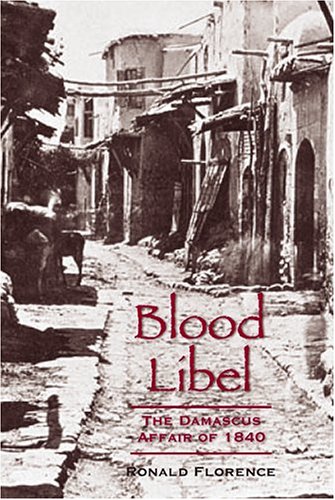 BLOOD LIBEL: The Damascus Affair of 1840

On February 6, 1840, Father Thomas, a Capuchin monk, and his assistant disappeared in the vicinity of Damascus after paying a not unusual visit to the city's Jewish quarter. Within a day, the small, multidenominational Christian community banded together, claiming, "The Jews sacrificed the Father." This blood libel (the charge that Jews killed Christians to use their blood in religious rituals) shattered the relative peace in which the Jewish community had lived under Muslim rule. Two Jews confessed under torture and then died in prison, unleashing a massive assault in which 65 Jewish schoolboys (some as young as five) and 75 men were imprisoned. As the situation dramatically escalated—a noted rabbi converted to Islam and the French, British and American consuls became involved with the prosecution—the case became an international cause célèbre and eventually a goad to political change in the area. This is great material, and Florence, a novelist ( ) and historian, handles it with dramatic flair and meticulous documentation. While this is not as complete a historical account as Jonathan Frankel's magisterial 1997 it's an excellent work of popular history.