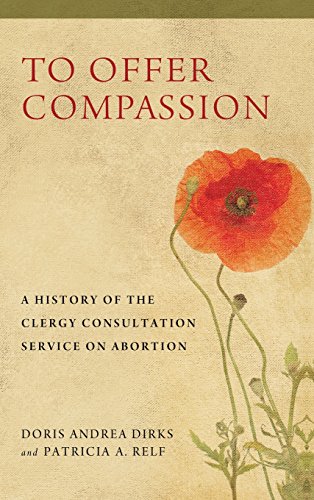 To Offer Compassion: A History of the Clergy Consultation Service on Abortion

Conservative Christianity has become synonymous with opposition to abortion, but before the 1973 Roe v. Wade Supreme Court decision that legalized it in the U.S., clergy organized to protect pregnant women and direct them to safe abortions. Dirks and Relf explore this extraordinary and little-known history through detailed first-person interviews and extensive research with Protestant, Catholic, and Jewish clergy who, between 1967 and 1973, created a pregnancy counseling service and national underground network to provide women with options for adoption, parenting assistance, and pregnancy termination. At the time, deaths from botched abortions, including self-induced ones, were estimated at 5,000 a year—though they were likely much higher—and were disproportionately among women of color, who had the least financial resources. These clergy pioneered the first “counselor-oriented clinics” and proved abortion could be a safe outpatient procedure. Dirks and Relf provide critically important social history that too many in today’s abortion wars have never known or chosen to forget.[em] (May) [/em]

This review has been corrected to reflect the fact that it is being published in hardcover, not trade paper.