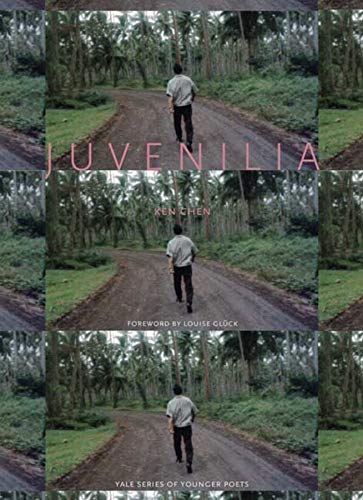 The latest Yale Younger Poet writes about his Chinese-American heritage; he draws on classic Chinese poets, such as Wang Wei and Li Yu. Yet his verse and prose stand at the farthest possible remove from the memoirlike poems, and the poems of first-person “identity,” that have characterized so much recent verse about U.S. immigrant life. Instead, Chen is “experimental” in the best and broadest sense of the term: each new page brings an experiment in self-presentation, in sentence, syntax, or (long) line. Prose poems digress into semantic analysis (“Love Is Like Tautology in the Same Way Like Is Like Tautology”); open-field verse resembles now an alienated, impersonal short story, now a page from an anguished diary: “He studies the ceiling for hours before he sleeps—for the ceiling is ours./ He wore the bedroom ceiling as his eyelid.” Self-consciousness (about travel, about “voice”) does not take him away from his sense of himself: rather, it becomes him, as when he begins: “The first sentence of this poem is not about you./ In this respect, it is unlike the last sentence and my heart.” Chen's parents appear as characters in the anti-novel, anti-memoir, first-person sequence. The New York-based Chen—who runs the Asian American Writers' Workshop—deserves attention for his daring invention, for the heretofore unknown hybrids throughout his work.