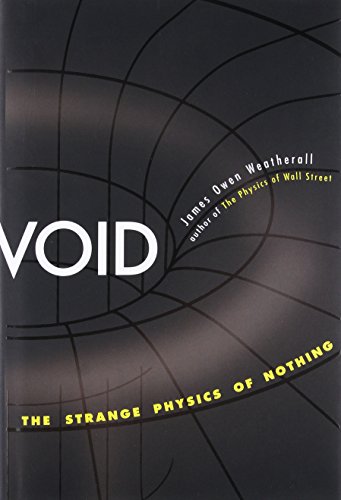 Void: The Strange Physics of Nothing

“What, according to our best physical theories, is nothing?” asks Weatherall (The Physics of Wall Street), a professor of logic and philosophy of science at the University of California, Irvine, in this slim volume for nonexperts. Weatherall explains that “empty” does not necessarily mean featureless. Covering hundreds of years of science, he describes a “bestiary of ‘nothings’ ” across shifting historical conceptions, including the totally empty void, favored by ancient Greeks; the unobservable, all-pervasive Cartesian plenum; Newton’s empty container, in which bodies move; the ubiquitous, vibrating luminiferous ether; modern permeating fields (electromagnetic, gravitational, etc.); and vacuum fluctuations, in which “stuff” is spontaneously created through matter-antimatter pairings. Further, readers see how the science of nothingness is significantly and complexly tied up with our most powerful cosmological theories—including classical mechanics, relativity, and quantum theory. Unifying the latter two “is one of the most difficult and important questions facing modern physics,” Weatherall notes, suggesting that ameliorating the clash between relativistic and quantum “nothings” would help them play nice. Readers get a dose of biography while following such figures as Einstein, Dirac, and Newton to see how top theories about the void have been discovered, developed, and debunked. Weatherall’s clear language and skillful organization adroitly combines history and physics to show readers just how much “nothing really matters.” (Dec.)
close
Details