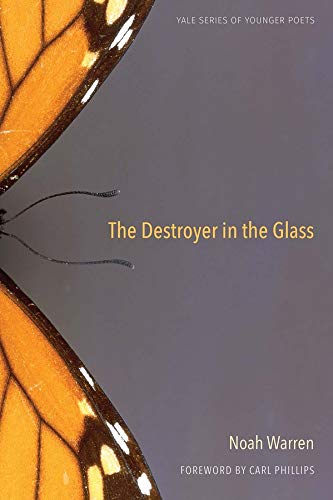 The Destroyer in the Glass

Warren, winner of the 2015 Yale Younger Poet’s Prize, exhibits a restless curiosity as he explores the lightness that comes with accepting uncertainty in this collection of largely pastoral lyric poems. He writes of finding comfort in the unknown, the unsustainability of isolation, and the distinct forms that loneliness can take. The poems are lithe and fluid, rhythmic and pointed. Warren’s alluring syntax underscores his own claims to being “helplessly Baroque”: “So winter blooms, hot, stark—/ three black notes,/ you, me, this, float/ together from the ark// revolving.” His economy of language, along with his keen use of enjambment, signals an aptitude for constraint and restraint. Warren can also charm, as with evocations of deep images such as “a vast Adirondack/ day/ drifts overhead like cold lake, the archaic spruce/ shudder./ (Mark my stoic indifference.)” But while his skill is evident, such passages can feel overwrought: “wary we touch/ fingertips and as our tongues/ meet strung nerves thrum and the sea’s lungs/ boom our chord—a clutch// of heart in teeth—now hollower notes—/ listen.” Nevertheless, Warren offers a raw and piercing vision: “I study to live my death well./ Through the chilly forest,// my mind ravens on ahead/ of my life// like a silent, monstrous bulldozer/ chased by a chariot with bells.” (Apr.)
close
Details