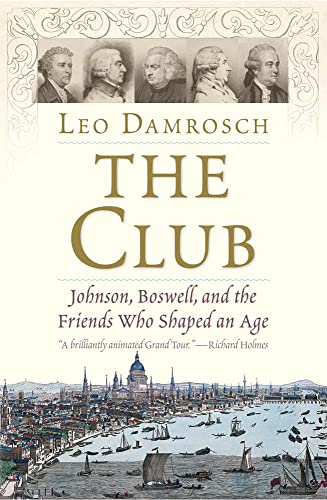 The Club: Johnson, Boswell, and the Friends Who Shaped an Age

This look at Samuel Johnson, his biographer James Boswell, and their social circle delightfully captures the bonds of friendship and competition which joined some of the late 18th century’s greatest minds. The titular club, which began meeting weekly at the Turk’s Head Tavern in London in 1764, was first proposed by painter Joshua Reynolds, as much to raise Johnson’s frequently depressed spirits as to provide a place to wine, dine, and, above all, converse until the wee hours of the morning. Over the next 20 years, its membership would come to include political philosopher Edmund Burke, actor David Garrick, playwright Oliver Goldsmith, historian Edward Gibbon, economist Adam Smith, and other luminaries. Damrosch (Jonathan Swift: His Life and His World) doesn’t provide a fly-on-the-wall account of the Club’s meetings but rather crisp, colorful portraits of its members, illuminated by quotes from their lively, sometimes contentious interactions with each other. Boswell, agreeing with Reynolds about Johnson’s love of debate, observed, “He has no formal preparation, no flourishing with his sword; he is through your body in an instant.” This effervescent history shines a light on the extraordinary origins of a club which still exists to this day. With 31 color plates. Agent: Tina Bennett, WME. [em](Apr.) [/em]
close
Details