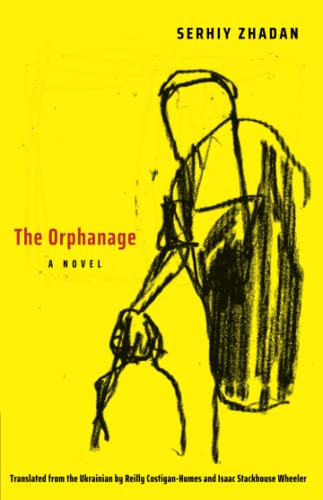 Zhadan (Mesopotamia) presents a nightmarish, raw vision of contemporary eastern Ukraine under siege from Russian-backed separatists. Pasha, a bespectacled teacher with a heart condition and an injured hand, keeps his head down, avoids politics, and just does his job. One January day, he must pick up his nephew from the local orphanage (where his unmarried, stressed-out sister, a railway stewardess, had left the epileptic boy years ago) and bring him home. On the way there, Pasha encounters roads destroyed by shelling, public transportation suspended, utility and cellphone service disrupted, and the train station crowded with stranded women, children, and old men. After reluctantly leading a ragtag assortment of vulnerable people on a dangerous trek back to their neighborhood and an uncertain future, Pasha reaches the orphanage and takes the surprisingly mature 13-year-old on a terrifying trek back home, with constant threats from mortar rounds, automatic-rifle fire, tanks, packs of starving dogs, menacing soldiers, and desperate civilians. With a poet’s sense of lyricism, Zhadan employs descriptions of weather and the sky as literal physical challenges but also as powerful metaphors for lack of transparency, justice, and truth, and the translators deserve credit for rendering Zhadan’s prose into colloquial English. This unblinkingly reveals a country’s devastation and its people’s passionate determination to survive. (Feb.)
close
Details