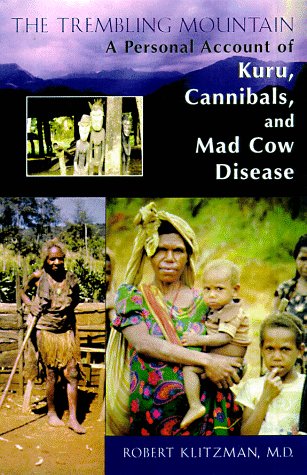 Between his undergraduate years at Princeton and medical school at Yale, Klitzman spent a year conducting basic epidemiological research in Papua, New Guinea. Here, as in his books covering his medical internship (A Year-Long Night) and psychiatric training (In a House of Dreams and Glass), he presents an engaging autobiographical account of his experiences. Working for Nobel Prize-winner (Physiology/Medicine, 1976) Carleton Gajdusek in 1981, Klitzman lived amid the Fore, a previously cannibalistic tribe in some of the most remote parts of the country. Their community had been devastated by kuru, a deadly and heartbreaking neurological disease, spread by the ritual consumption of deceased relatives (including brain matter). Over the course of the narrative, the young Klitzman interviews stricken individuals, comes to grips with hugely divergent cultures and comes of age himself. What gives kuru additional and timely import, and makes it more than just an odd tropical malady, is that it appears to be closely related to Mad Cow disease. Despite the subtitle, however, the link between the two diseases, while very real, is not lingered over by Klitzman. But even stripped of the headlines, his scientific adventure story, although occasionally reflecting a na ve and self-centered young man, is a briskly engaging and informative work. 75 photos. (June)
close
Details