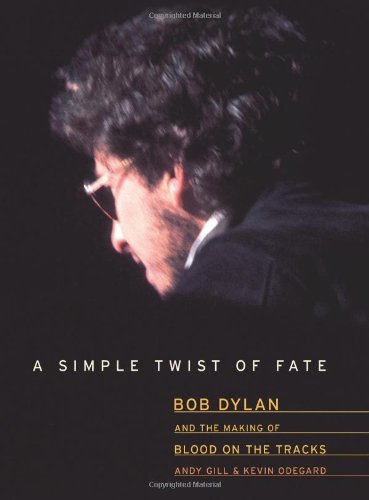 A SIMPLE TWIST OF FATE: Bob Dylan and the Making of "Blood on the Tracks"

This is a solid look at the background to the making of , considered one of Bob Dylan's greatest recordings since its release 30 years ago. Gill is a skilled British music journalist, as is Odegard, who was one of the Minneapolis session musicians Dylan used to redo five songs recorded three months earlier in New York City. The authors look at the album they believe "set a new benchmark in confessional songwriting" by looking at it from every possible angle: Dylan's musical decision to return to folk after his electric and country periods; the disintegration of his marriage to his first wife, Sara, in the wake of Dylan's various affairs; his strained relationship with his younger brother, David, who helped remake the album in Minneapolis. While the authors do give a truly complete sense of the background that produced the album, much of this has been covered in far more detail in such books as Clinton Heylin's (which the authors cite) and will be familiar to all Dylan fans. Fortunately, the authors shine throughout the rest of the book, which presents an enormous amount of previously unreported detail about the making of the album—down to the kind of microphones that were used. Their descriptions of the energy and enthusiasm of these musicians will make even the most hardcore Dylan fan hear anew.