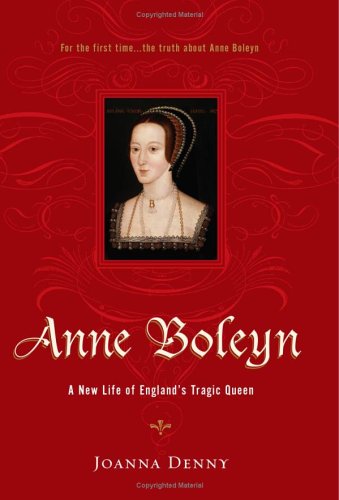 Denny seeks to redeem Anne Boleyn from the slanders of Catholic propagandists hired to paint her as a monster. Anne and her diplomat father, Thomas, were advocates of the "New Religion"—the Protestantism spreading through England in the early 16th century. The Boleyn family's meteoric rise in status and influence threatened Cardinal Wolsey and his Catholic power base even before Henry VIII divorced the Catholic Catherine of Aragon in order to marry her lady-in-waiting, Anne, thus initiating England's Protestant Reformation. While effectively setting this scene of high-stakes intrigue, Denny focuses on Anne; in her interpretation, Anne's integrity and moral courage lay at the center of the period's vortex of personal and political strife. Brilliantly evoking Henry's bullish intensity, Denny mines the 17 existing love letters that reveal the king's impatient infatuation with Anne. By contrast, she portrays Anne as reticent, acquiescing to the king out of commitment to the Protestant Reformation rather than personal desire. Denny lucidly catalogues the technicalities of Henry's seven-year legal struggle to make Anne his wife and how Anne fell from favor when she failed to produce a male heir. Finally, Denny (the author of a fictional trilogy on the Tudors) records Anne's stoicism as she was charged with incest and adultery, tried and, in 1536, executed. Although she sometimes idealizes her subject, Denny's defense of Anne is coherent and thoroughly readable.