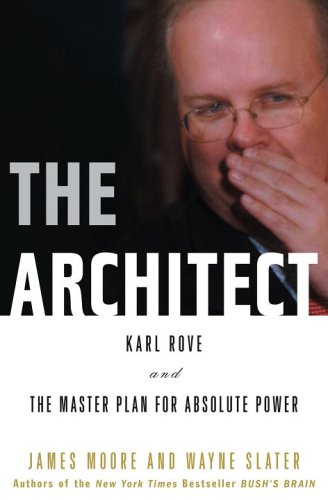 The Architect: Karl Rove and the Master Plan for Absolute Power

This bold follow-up to journalists Moore and Slater's bestseller, , takes a provocative look at how Karl Rove used George Bush's various campaigns and presidency to engineer nothing less than the assertion of a long-term Republican hegemony and the complete dismantling of the Democratic Party. To make their case, they draw on a wide range of materials, including interviews and reportage done by other journalists to demonstrate how Rove mobilized his party's base, forging an unlikely alliance between religious and economic conservatives, while mounting targeted assaults on gays and lesbians, trial lawyers and labor unions. Yet in this narrative, his bid for a complete realignment of American politics begins to derail with the failure of Bush's Social Security reform plan, the administration's response to Hurricane Katrina, the failed nomination of Harriet Miers to the Supreme Court and, most significantly, the implication of Rove in the leak of CIA employee Valerie Plame's identity. In this damning but scattered account, Rove remains an elusive, almost inhuman figure, despite short digressions about his relationship with his gay stepfather and his weekly brunches with members of the White House and RNC teams during the reelection campaign. The result is a compulsive page-turner that's bound to be divisive.