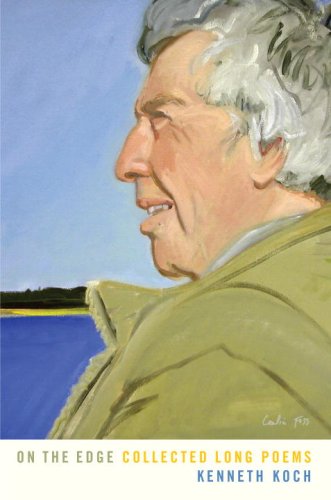 On the Edge: Collected Long Poems

One doesn’t go to Koch to experience the opening of the poet’s mind to the world (Ashbery’s stated desire), but for urbane, often vaudevillian, entertainments. This volume—a companion to 2005’s (also Knopf), which gathers all of Koch’s shorter poetry—shows Koch stretching out in his six extended works. The early Dada epic “When the Sun Tries to Go On” is a 60-plus page list of syntactical detritus, punctuated by bizarre apostrophes: “O tuxedo/ May conceited lobster!” “Ko, or a Season on Earth” is Koch’s masterpiece, a mock epic in Byronic stanzas about a Japanese baseball player who hits it big, punctuated this time by impossible synchronicities: “Meanwhile the entire continent of Asia/ Was moving sideways unpredictably/.../ Hawaii, meanwhile, feeling simply great/ Was speeding toward acceptance as a state.” “Impressions of Africa” shows Koch opening up a more personal space: the poem is a journal of his long journey to Africa. At last, there is a psychological element (of sorts), as Koch finds himself silenced: “I look at nothing for a while.” This book may change some opinions on Koch; readers may ask whether his prodigious formal inventiveness thrives given more room, or if the poems remain surface-oriented, like a body of wate that never moves but looks lively wherever you are watching.