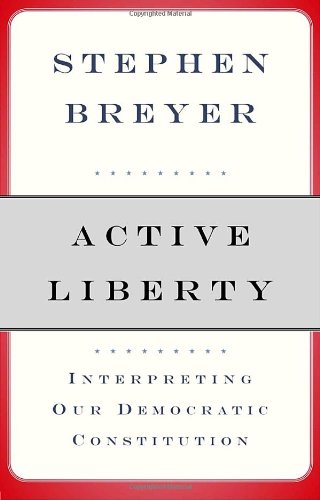 Supreme Court Justice Breyer offers his view of constitutional interpretation at a crucial time, when the Court's future is very much at stake. Breyer himself made the crucial deciding votes recently in the two 10 Commandments cases: he notably split his vote, supporting the display in Texas and opposing the one in Kentucky, a nuanced choice that confounded many and that he explains lucidly here.

Breyer works this explanation into a larger look at an important aspect of his judicial philosophy: the need for justices to look at cases in light of how their decisions will promote what he calls "active liberty," the Constitution's aim of promoting participation by citizens in the processes of government. It's an approach that emphasizes "the document's underlying values" and looking broadly at a law's purpose and consequences rather than relying on a rigid overarching theory of judicial interpretation.

The justice looks at six areas of law to show how this approach influenced, or might have influenced, high court decisions on free speech, affirmative action, and privacy, among others. For instance, in free speech, Breyer notes that an active-liberty outlook would have led the Court to support campaign finance laws controlling soft-money contributions. He explains how the Court's decision in favor of the University of Michigan law school's affirmative action program supported the participation of minorities in our political system. (Interestingly, he doesn't discuss the Court's simultaneous decision against the university's undergraduate affirmative action program.)

Breyer saves his hard ball for the very end: a calm, judicious but powerful attack on the interpretive approach of some of his judicial colleagues, what he calls an "originalist" approach, relying primarily on a close reading of the text of a statute or the Constitution. Anticipating originalists' criticism that only their approach can prevent judicial subjectivity, Breyer forcefully illustrates the many constraints on subjectivity and shows that originalism is not as objective as they claim.

Breyer's prose is admirably simple and clear, and his discussion shows a keen legal intellect that espouses broad values rather than narrow theories, and a deep, humane concern with fostering democracy and the well-being of the citizenry. This will be essential reading at a possibly watershed moment for the Supreme Court.