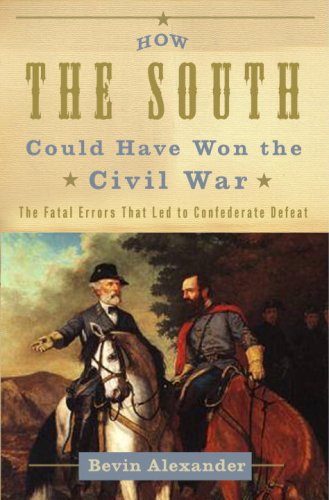 How the South Could Have Won the Civil War: The Fatal Errors That Led to Confederate Defeat

Military historian Alexander ( et al.) offers a well-reasoned brief that lays the blame for the Confederate defeat in the Civil War primarily on President Jefferson Davis and Gen. Robert E. Lee, and their war-long insistence on conducting toe-to-toe frontal assaults against the much-stronger Union Army. Alexander argues that had Davis and Lee listened to Gen. Stonewall Jackson, things very well could have turned out differently. Jackson—and like-minded generals Joseph E. Johnston, Pierre G.T. Beauregard and James Longstreet—warned against conducting an offensive war against the North. Instead, they advocated waging “unrelenting war” against “undefended factories, farms, and railroads” north of the Mason-Dixon line, bypassing the Union Army and winning indirectly “by assaulting the Northern people's will to pursue the war.” While Alexander convincingly argues that there was nothing inevitable about a Southern defeat, he is no “Lost Cause” advocate. Instead, he presents well-drawn and clear-eyed tactical and strategic analyses of the war's most crucial battles (including First and Second Manassas, Antietam, Fredericksburg, Chancellorsville and Gettysburg) to buttress his contention that had Jackson not perished in May of 1863 (and had Lee and Davis adopted Jackson's strategy), the South just might have won the Civil War.