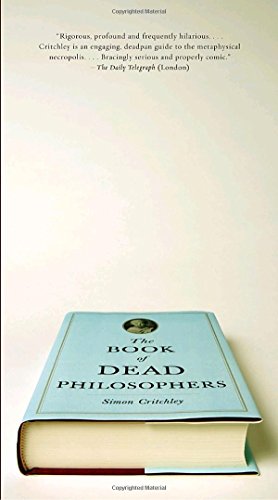 The Book of Dead Philosophers

According to Cicero, “to philosophize is to learn how to die.” Critchley ( ) illustrates this claim in his portraits of the deaths of more than 190 philosophers from the ancients to the analytics of the mid–20th century. A primer on just about every notable philosophical figure in history, this book challenges readers to learn from the philosophers' conduct in life and the circumstances of their deaths. Confucius believed that mourning underscored the value of life; accordingly, his followers grieved his death for at least three years. Thoreau, Emerson and John Stuart Mill died of ordinary ailments while relishing the natural world. Aquinas found serenity contemplating the bough of a tree, fitting consolation for the philosopher who preached the interconnectedness of nature and the soul. Dionysius spent the second half of his life rejecting Stoicism and embracing hedonism yet committed a protracted suicide by voluntary starvation. David Hume proved that atheists could die happy. The book offers an interpretation of death's potential as a final artistic and intellectual endeavor; it is a witty and generous gift that will leave readers perhaps a little less afraid of death and more appreciative of life.