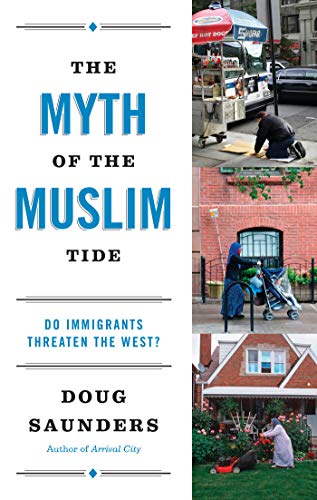 The Myth of the Muslim Tide: Do Immigrants Threaten the West?

Alarmed by the uptick in anti-Muslim sentiment in the Western world (as horrifically evidenced by Anders Breivik's shootings in Norway in 2011), Saunders, the European bureau chief of The Globe and Mail, sets out to correct the rumors and misinformation that plague the world's second largest religious group. Acknowledging that xenophobia is nothing new (much of the same rhetoric has been lobbied at some point against Catholics, Jews, and other groups), Saunders blames much of the pernicious propaganda on "a large group of writers and political leaders who should have known better," namely Bruce Bawer, Newt Gingrich, Bat Ye'or, and the Financial Times' Christopher Caldwell, whose inflammatory remarks and falsehoods have spread like wildfire, and with significant consequences—Breivik cited Bawer's work as being influential to his beliefs. Saunders (Arrival City) proceeds to systematically denounce numerous alleged "facts" or perceived trends (e.g., the rate of Muslim immigration will increase; Muslims are guided by an ideology rather than a faith; terrorism is inherent in fundamentalist Islam; etc.), and then offers some solutions. Rather than vilifying immigrants, he argues, Western societies should work to ease their integration into society and embrace multiculturalism rather than merely paying lip service to it. Saunders is quick to admit that the vilification of Muslims is a complex problem requiring many big- and small-picture changes, but his argument is nevertheless cogent and timely. (Aug. 21)
close
Details