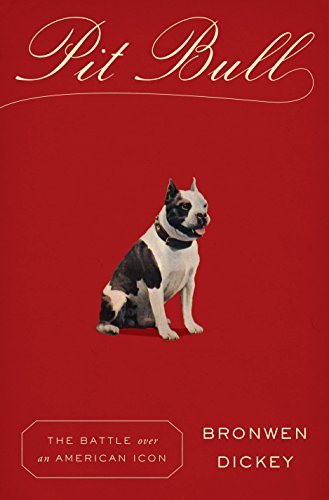 Pit Bull: The Battle Over an American Icon

Dickey, a contributing editor at the Oxford American, didn’t know much about pit bulls, other than the fact that some consider them dangerous, until she and her husband adopted one. She became more interested as she looked into the curious history of this unfairly maligned animal. Dickey digs deep, investigating dog fighting and breeding, and interviewing more than 350 people, including dog trainers, animal control officers, and animal behaviorists. Her research illuminates many of the facts and exposes many of the myths surrounding pit bulls and dogs in general. As she quickly learns, a pit bull is more of a body type than a breed; many species fall under the general classification. Further, many of these same animals were considered to be terrific, loving, loyal pets until the early 1970s, when dog fighting burst into the collective consciousness along with high urban crime rates . That resulted in an entirely different perspective on bigger breeds such as rottweilers, German shepherds, Doberman pinschers, and especially pit bulls. Though media-fed panics regarding certain breeds are nothing new, the bad PR surrounding pit bulls has stuck, due to unrealistic expectations of dogs, often unreliable stats, and an always-on media in search of salacious stories. Dickey’s immersive and illuminating work deserves a wide audience. [em](May) [/em]
close
Details