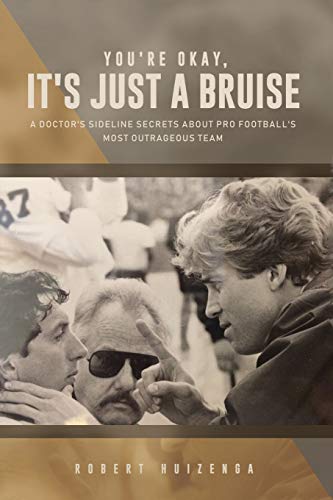 ""You're Okay, It's Just a Bruise"": A Doctor's Sideline Secrets about Pro Football's Most Outrageous Team

Huizenga joined the L.A. Raiders in 1983 as the team internist and resigned in 1990, disillusioned at the way pro football, and the Raiders in particular, treated, or failed to treat, players' medical problems. The title was the tag line of his orthopedic colleague, Robert Rosenfeld, who used it with virtually every injured athlete and winked at the use of all sorts of pills by team members. While president of the NFL Physicians' Association, Huizenga campaigned against the use of anabolic steroids, but his proposal to ban them was quietly squelched by the owners in 1992. Here he continues the battle by detailing the case of Lyle Alzado, an ex-Raider who died in 1992 from, among other causes, decades-long use of muscle builders. The author has suggestions for making football less lethal but seems pessimistic about their adoption. A shocker, a sort of Ball Four about the grid game. (Nov.)
close
Details