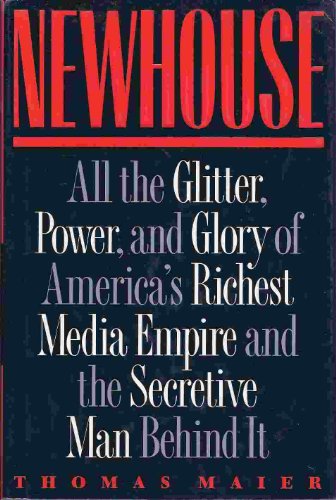 Newhouse: All the Glitter, Power, and Glory of America's Richest Media Empire and the Secretive Man Behind It

Samuel I. Newhouse Jr., generally known as Si, is not only one of the richest men in the U.S., he also heads its most powerful media company, Advance Publications, which owns a chain of high-visibility magazines, the Random House companies, newspapers and cable-TV interests. He is also, by his own choice, little known to the public, so a book about him, his personality, interests and remarkable influence is very much in order. Maier, a New York Newsday reporter, labored mightily to penetrate the veil Newhouse has established between himself and the world, and has come up with as thorough an account as an outsider probably could write of the Newhouse career: his early uncertainties in the shadow of a dynamic and demanding father, his growing skills in managing the magazine empire that never much interested Sam senior, his eventual triumphs in acquiring the kinds of properties-Random House, the New Yorker-his father would have delighted in. It is all here-the victorious struggles with the IRS over taxes, the ups and downs at Vogue, the relaunch of Vanity Fair, the New Yorker troubles and eventual triumph, the reshaping of Random from a largely literary house to a mega-publisher. The writing is patchy, too often shoving the reader in the required direction; there are too many repetitions and longueurs (Tina Brown, clearly the most quotable of his interviewees, takes over whole chapters). But the book is conscientious, accurate and fair-minded, and gives the reader much to ponder about the virtually unquestioned power that belongs to the Newhouse family. Photos not seen by PW. (Oct.)
close
Details