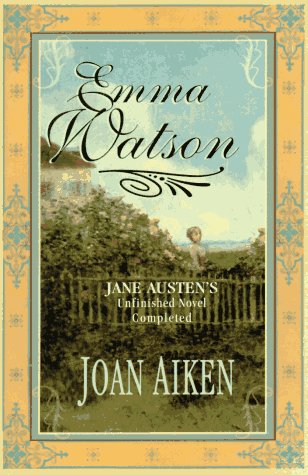 Margarine is bound to disappoint the habitually buttered tongue, saccharine destined to fall shy of a sweet tooth's desire. And fans of Jane Austen surely know by now that none of her many impersonators has managed to create a novel as rich as the real thing. Aiken, who has had previous success with Mansfield Revisited, Deception and Jane Fairfax, adds a new wrinkle to the craft of Austen flattery. Instead of writing a sequel to an Austen work, she has taken The Watsons, an unfinished work begun by Austen in Bath in 1804, just before her father's death, and ""finished"" it. Boldly, she paraphrases entire scenes wholesale from Austen's original, including dialogue. Her main character descriptions are also lifted directly from the original, but she departs from plot developments outlined by Austen in favor of her own inventions. Aiken picks up where Austen left off: Emma, having been raised by her aunt, returns to her father's home. She has barely settled in when Mr. Watson dies, leaving her at the mercy of a family with several daughters of marrying age. More self-reliant than the other women around her, Emma moves away to set herself up as a music teacher. But, of course, she can't fully escape the mating dance and soon finds herself with two suitors. Aiken delivers the milieu and themes of life in rural 19th-century England, a smart heroine, scheming family members, marriage plots, inheritances and genteel class conflicts--and just about everyone gets his or her just deserts in the end. If her prose lacks Austen's acuity and understated wit, it's more than adequate to the task of delivering a fluid comedy of manners. Aiken is no Austen, but she's at the top of the class of disciples. (Sept.)
close
Details