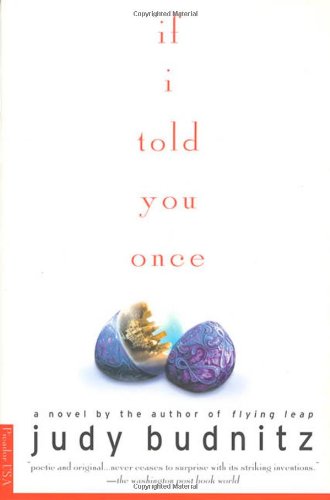 If I Told You Once

This disquieting debut novel from the author of the praised short story collection Flying Leap singes itself artfully into the imagination with its hard-edged, folktale-influenced exploration of the fate of four generations of women in Eastern Europe and America. During WWI, young Ilana vows to escape her village, surrounded by bandits and timber wolves, and the life (continual pregnancies, hard physical labor) she is certain to inherit. Braving a cold, surreal world where wolves walk on their hind legs and severed feet turn up by the side of the road, she finds shelter with the witchlike healer Baba before meeting Shmuel, a musician who tells her about America. Together, Shmuel and Ilana flee their unnamed, devastated country for a new life in New York City. While Shmuel works as a musician and actor, Ilana cares for their twin boys and daughter, Sashie. Like her mother, Ilana favors the boys and neglects Sashie, reinforcing a pattern of fierce love and self-destruction that will be adopted by Sashie; Sashie's daughter, Mara; and Sashie's son's daughter, Nomie: ""They are treading in circles in their in-looking lives, circles within circles, getting smaller and smaller until soon they will be spinning in place."" As these women mourn the fates of the men they've glorified (Ilana's twin sons are killed in WWII, Sashie's husband is unfaithful, Mara's brother falls in love with the wrong woman), each telling her own story in short, alternating sections, the line between fantasy and reality blurs. Finally Ilana, through Nomie, resolves to break the cycle of madness. Budnitz's hypnotic prose, as tight as a coiled spring, dream imagery (both poetic and fierce) and instinct for the grotesque cast a weird light on familiar subject matter, and owe as much to Isaac Bashevis Singer's early demon-haunted fables as to contemporary multigenerational sagas. Although eventually the emotionally dark atmosphere may enervate the reader, the novel has a haunting power. Agent, Leigh Feldman at Darhansoff and Verrill. Author tour. (Nov.)
close
Details