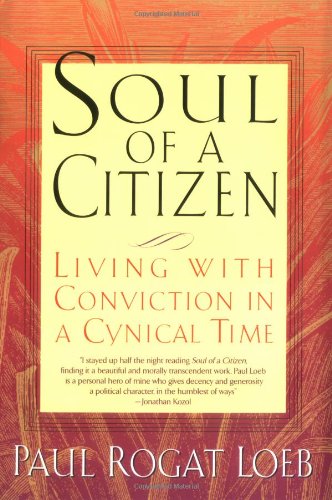 Soul of a Citizen: Living with Conviction in a Cynical Time

Informed by his lifelong participation in peace, justice and environmental causes, Loeb (Generation at the Crossroads, etc.) offers Americans a new vision for personal engagement with societal issues. A Seattle-based scholar, he eloquently argues for a return to community involvement and social activism, which, he says, have declined since the 1960s and 70s. He gently chides former activists lost to private pursuits, fatigue and cynicism and warns of increasing social isolation and the widening opportunity gap between rich and poor, despite our robust economy. Throughout, Loeb emphasizes the psychological and spiritual importance of the human connection. Believing that personal stories, not politics, capture peoples attention, he seamlessly weaves in inspiring examples of unexpected heroism in ordinary people and successful activism. One such example is 100-year-old Hazel Wood, the grandmother of the environmental movement, who championed neighborhood, day care, economic inequity and pollution issues. Loeb challenges all citizens to take action on their concerns and suggests an activist model for our times, stressing a Zen-like satisfaction in the journey. Even readers who disagree with his liberal politics will find compassion, intelligence and thought-provoking wisdom here. Agent, Geri Thoma of the Elaine Markson Agency; $100,000 ad/promo; first serial to Redbook, Modern Maturity and Parents; 16-city author tour. (May)
close
Details