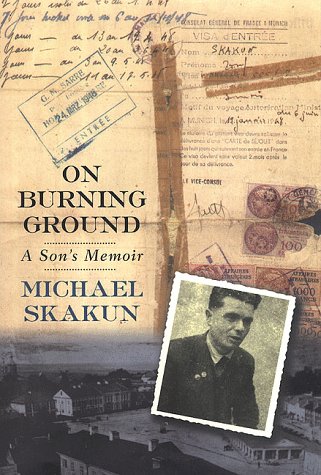 Distinguished both by outstanding writing and a profound sense of moral complexity, this son's memoir of his father's incredible survival stands out among Holocaust memoirs. In 1941, when the Nazi noose tightened around Navaredok, Poland, Joseph Skakun, a young Talmudic scholar, tried to save his mother from death by hiding her in a basement. After his efforts failed and the Jews were rounded up, Joseph escaped into the forest and fled to Vilna, where he managed to borrow a birth certificate from Stefan Osmanov, an acquaintance who was a Muslim Tatar. Because he was blue-eyed and blond, Joseph was able to assume Osmanov's identity. ""But here father, thrown back on his own slight resources, secretly crafted a new identity out of whole cloth--created a mask so tight-fitting that it became nearly one with his life."" Joseph quickly learned the rudiments of Islam, and, since Muslims were also circumcised, he was accepted into the German foreign labor program in Berlin. Assigned to farm work, Joseph tried to keep to himself but was drawn into village social life. When a fellow laborer became suspicious, Joseph enlisted in the SS out of desperation. Fortunately, the war ended before he was mobilized--thus, according to the author, his father was saved from truly collaborating with Hitler. Skakun, an editor and translator who has served as a special consultant to the U.S. Holocaust Memorial council, offers an unusual and gripping account of resourcefulness, narrow escapes and ""moral improvisation."" B&w photos not seen by PW. (June)
close
Details