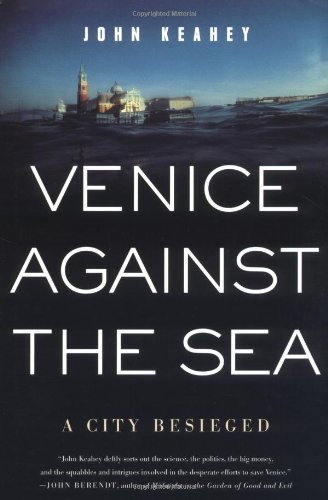 VENICE AGAINST THE SEA: A City Besieged

Built on a lagoon, Venice is now in constant danger of becoming a new Atlantis, explains journalist Keahey () in this fascinating look at the ecological disaster facing the city of canals. Not only is sea level "sixteen feet higher than it was six thousand years ago when the lagoon was formed," a situation made increasingly worse by global warming, but the foolish extraction of ground water for industrial uses has accelerated the city's sinking. Indeed, a catastrophic flood in 1966 was a clear warning, and in 1996 there were "ninety-nine tides over thirty-one inches," all of which flooded St. Mark's Square. Keahey writes perceptively of Venice's ecology and history—its mythic founding by descendants of Trojan warriors, its involvement with the Crusades and the development of medieval trade routes—quoting a wide variety of sources from Livy to Jan Morris to scientists at the 1997 Intergovernmental Panel on Climate Change. While the situation looks dire (malfeasance on the part of the Italian government has only made things worse), Keahey investigates several possible solutions, like a potentially promising plan for barrier gates similar to the ones London uses to control the Thames. This informative book examines an urban environmental crisis in the making.