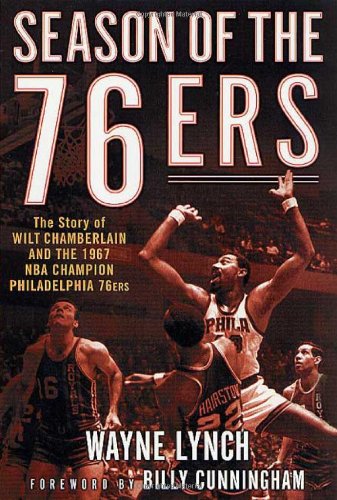 SEASON OF THE 76ERS: The Story of Wilt Chamberlain and the 1967 NBA Champion Philadelphia 76ers

Lynch gives a near play-by-play account of the nail-biting season when the Sixers finally ended the Boston Celtics' eight-year winning streak in this sentimental but sometimes stirring hagiography of the team and their coach, Alex Hannum. The subtitle is apt, for Chamberlain dominates the book as he dominated the game; the rest of the story, though well-researched and competently told, seems a little thin in comparison. The most captivating sections are those that describe how the team was put together—after this, the narrative blurs into a series of plays, games and scores that become numbing in spite of Lynch's clipped, dramatic prose and copious dialogue drawn from press accounts and interviews that he conducted over the last few years with team members and coaches. Lynch, vice-president of news and programming for NewsChannel 8 in Springfield, Va., is an adamant Sixers fan, a position that may alienate certain readers while endearing him to the other fans of the team who are likely to read this book. Enthusiasts of NBA history and Chamberlain should also find something here to hold their attention. 18 pages of photos not seen by .