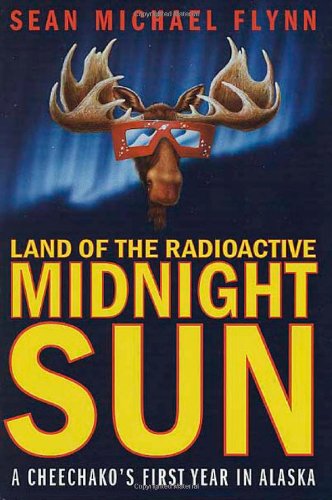 LAND OF THE RADIOACTIVE MIDNIGHT SUN: A Cheechako's First Year in Alaska

For one year in the late 1990s, Flynn was posted to Eileson Air Force Base near Fairbanks, Alaska, as a public affairs officer, one of the "desk weenies" assigned to put a good face on unpopular military activities, like environmentally hazardous combat flying exercises and radioactivity-fueled facilities on native lands. His personal goal was to transform himself from "cheechako," or greenhorn Lower 48-er, into a "real Alaskan." While he approached his duties spinning bad news for the military with seasoned skepticism—noting his lies in parentheses for the reader—the challenge of becoming a real Alaskan seemed to involve his manhood and was therefore more serious. Commenting on underdressed (for the weather) rugby players, he concludes, "they're all just afraid of being called a wimp. Any guy can appreciate that." He treats readers to several bloody and drunken rugby matches in 30-below weather, plus some attempts at dogsledding, salmon and halibut fishing, moose eating and gold panning. Flynn liberally seasons this virile menu with complaints about the difficult guy/gal ratio and more than a little finger-pointing at the gals who look like guys. Ultimately, Flynn decides being a real Alaskan is less about endurance and more about attitude (e.g., if you're freezing, go get a jacket or stop sitting in the snow). In the last pages, Flynn, like many of his "real Alaskan" friends, leaves Alaska for more urban settings—after all, as Flynn puts it, Manhattan's so much better at "pizza and women."