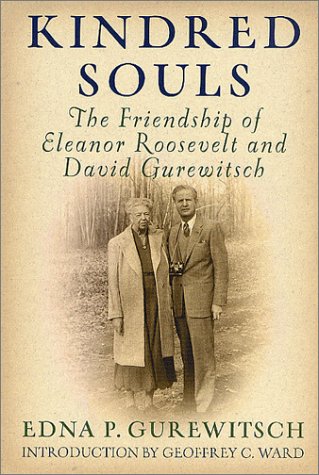 KINDRED SOULS: The Friendship of Eleanor Roosevelt and David Gurewitsch

"You know without my telling you that I love you as I love and have never loved anyone else," wrote Eleanor Roosevelt to her doctor, David Gurewitsch, in 1955. It was an extraordinary declaration by the world's most famous woman, one that has intrigued historians and biographers for decades. Now the full story behind this relationship is revealed by an unlikely source—David's wife. Gurewitsch writes that her husband and Mrs. Roosevelt first met in 1944. Shortly thereafter, David became her personal physician, and a friendship blossomed that endured until Mrs. Roosevelt's death in 1962. It was, Gurewitsch admits, a curious friendship. David was 18 years younger and "uncommonly handsome"—facts that made some Roosevelt family members "uneasy" about the relationship. But Gurewitsch dispels any questions about an intimate affair. Mrs. Roosevelt did possess "romantic feelings" toward David, she writes, but these were controlled by the pair "maturely and honorably." David frequently traveled with Mrs. Roosevelt; and after her marriage to David, the author was a constant companion as well. The trio even lived together in a house on Manhattan's Upper East Side. Thus, Gurewitsch literally had a living room seat from which to observe Mrs. Roosevelt's uniquely diverse life: mother, party hostess, social activist, Democratic spokesperson, world diplomat. It is chiefly for these observations, coupled with excerpts from the Gurewitsch–Roosevelt letters, that this book is valuable. With admiration for her subject, Gurewitsch has significantly expanded our understanding of the last years of the 20th century's great American woman. 16 pages of b&w photos not seen by .